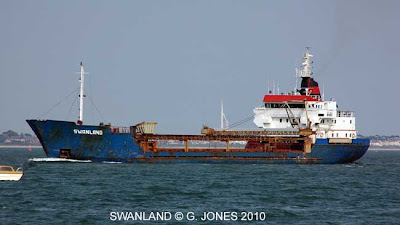 
BBC news reported this morning 27/11/2011 the cargo vessel Mv Swanland had sunk in bad weather in the Irish Sea.

Swanland, built in 1977 was carrying 3,000 tonnes of stone from Raynes Jetty in North Wales to Cowes in the Isle of Wight, when she sent out a mayday call 30 miles off the north west coast of Wales at 02:00 GMT.

Two crewmen were rescued and five Russian crewmen are currently missing, vessels in the area Mt Bro Gazelle, Mt Monsoon and Mt Keewhit were assisting the RNLI, along with RAF rescue helicopters from Anglesey, Cornwall and the Irish Republic.

Latest : Sad news reported that a body has been recovered from the sea near the scene, and an empty life raft was recovered, but was empty.

Two of the survivors were flown to the local hospital in Bangor, who described the vessel being hit by an "enormous wave" which rolled the vessel over and then broke in two.

Rescue services are deciding to call off the search for tonight and resume again in the morning.

Let's hope all crewmen can be rescued and our thoughts are with those involved at this tragic time.


RAF rescue footage
Posted by The Ship Scrapping List at 09:26

Hello and welcome to the Ship Scrapping Blog

The following is a guide to the given in this blog.

You can use the IMO number to find an indepth search for the vessel via Google etc, it is very time consuming for me to carry out further data on vessels unless they are of special interest.

This blog does not have photographs of ships being demolished at any of the yards, unless I have permission from the photographer to put them on this site.

Vessels destined for the breakers usually go through a name change and flag change usually to hide the identitiy of the vessel.

All the infomation is given in good faith, and I accept no responsability for incorrect data, it may be up to quite a few months before they are sent to their final destinations.

Information on this site is sourced from various places or sent to me, and so collated to give the final data, big thanks to those involved.

I have noticed recently that a number of web sites have started copying the information from this site to their own, if this continues without my permission, I will stop posting on this site.

All infomation and photographs on this blog is copyright. Please do not copy and put on your own site and claim its your own.

Below is a list of countries and their respective codes: